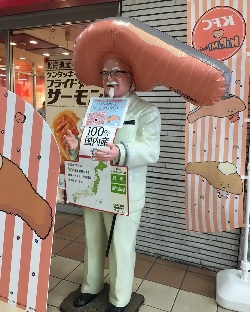 A KIRIMI-chan promotion at a Japanese KFC store, featuring a Colonel Sanders/KIRIMI-chan statue.

KFC (Kentucky Fried Chicken) are a popular international chain of fast food restaurants specialising in fried chicken. Its headquarters are in Louisville, Kentucky in the United States. Its brand ambassador is Colonel Sanders, an American business man who was the founder of the KFC company and appears on the KFC logo.

In Japan, there are various KFC restaurants promoted by Sanrio. These are listed in a table below. The original source with additional information including street names, phone numbers, access and holiday details may be found here.

From October to November 2015 only, KFC restaurants in Japan ran a special "KFC x KIRIMI-chan" promotion in which special Hokkaido Kentucky fried salmon was available.