This article has some information reworded from English Wikipedia 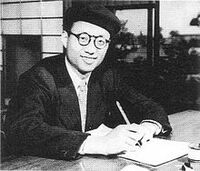 Osamu Tezuka (Japanese: 手塚 治虫, born as 手塚 治) was a manga artist, animator and cartoonist. He was born on November 3, 1928 in the Osaka Prefecture of Japan.

Osamu Tezuka is very popular, and has many nicknames such as "the Father of Manga". He has been regarded to be a figure similar to the Western Walt Disney (person).[1]

Some of his popular manga/franchises included Astro Boy, Kimba the White Lion and Princess Knight.