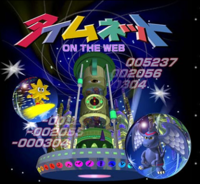 Promotional logo and artwork showing two of its characters

Timenet is a fictional world in the Timenet franchise, hinted to be created by the Toki no Roujin in the beginning of Sanrio Timenet after starting a new game.

In Sanrio Timenet, there are lots of places of interest here or can be accessed from Timenet, such as the Field/Bio Farm, Tower, Puroland (based on the real world Sanrio Puroland), the Sea Temple, Game Center and Mars, with many more examples. The nameless Hero & Rival from Sanrio Timenet accessed this world from their computer from an email from the Toki no Roujin, probably from Earth. Sanrio Timenet is known for its animal-like species known as Monsters, which can fight in battle.

Space-Net locations and the Rainbow System is hinted to be part of Timenet or a parallel universe, due to some characters like Eepy and Rexwalker (former Monsters) returning, and Chronos 107 being based on the Toki no Roujin, but the details on this may not have been overtly explained. Earth and Mars are both locations in the Timenet franchise, with Mars being both where Monster Zakki/White Zakkī is fought at the Mars Basis, and the name of a planet in Uchuu Patrol.