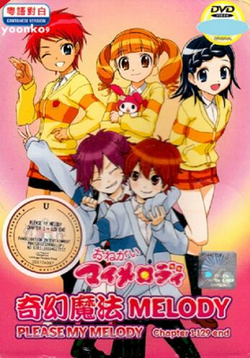 My Melody's Magical Adventure is a mid-2000s English and Cantonese dub of Onegai My Melody by Studio Comet. It may also be known as Please My Melody.

It has aired on Cartoon Network in Asia. Furthermore, it seems a United Kingdom version was planned but cancelled. Its airing in the United States is also part of a rumour.

According to what may be a user's original research; voice actors were as such: