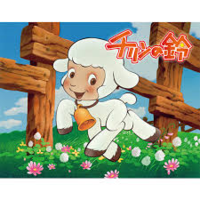 Ringing Bell (Japanese: チリンの鈴, Chirin no Suzu, literally Chirin's Bell) is a Sanrio Film released on March 11, 1978 in Japan and on April 8, 1983 in the United States about Chirin, a lamb who wears a ringing bell.

It was originally shown with the Sanrio film adaption of the novel The Mouse and His Child.

It is the film adaption of a (notably dark) children's book called Chirin no Suzu by Takashi Yanase published in 1978 by Froebul-Kan. It teaches about the negative side of life and nature, but equally how in seeking revenge and acting against our true nature one can become a manifestation of the 'evil' they are fighting against.

The film and book may be a play on the Biblical phrase, "a wolf in sheep's clothing" describing a person who appears or presents themselves in a gentle way but suppresses a malicious side to them.

The main character of the film is Chirin, a young and originally naive lamb brought up by his loving mother. Chirin's mother had told Chirin never to go beyond a fence surrounding the farm in which he lives. However, when Chirin's mother was killed by Woe the wolf he his heartbroken, angry and filled with feelings of revenge to kill the wolf.

Soon however Chirin develops a bond with the wolf as he trains Chirin to be an aggressive killer more like the wolf, and they travel the mountains killing many.

Chirin cannot bring himself to kill other sheep from the barn in which he was born even though he attacked the dogs and is faced with traumatic memories from his past and an identity crisis. When the wolf doesn't accept this, Chirin (now as an aggressive ram) kills the wolf with his horns, who comments that he was happy Chirin was the one who killed him.

However, after Chirin kills the wolf he is left with no role model as the sheep he lived with reject him, and is left to wander in the mountains alone.