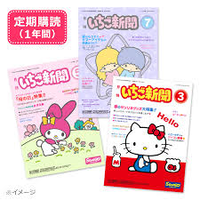 It was launched in 1975 and was the original publication which began the popular Sanrio Character Ranking competition.[1]

There was a similar 1990s Sanrio magazine in English available at Sanrio Gift Gates and other stores known as A La Mode, but it too was discontinued.

For the 50th Anniversary of Sanrio, the book Sanrio Days contains basic data (dates and characters on the cover) and small scans of the covers for the PR (March 1975) issue, followed by the first 261 issues of The Strawberry News. (pp. 134 to 141)