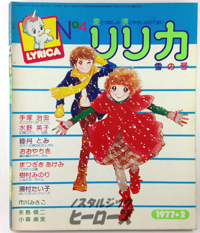 Lyrica (Japanese: リリカ), also stylised as LYRICA 〜リリカ〜 was a manga/comics magazine published by Sanrio, launched on September 1976[1], but Lyrica No. 1 is dated November 1976, so some clarification/amendment is needed for this data.[2]

Earlier, Sanrio had launched The Strawberry News (originally a free March 1975 issue, followed by the official first April 1975 issue), which unlike Lyrica continues to this day.

Lyrica was known for its full-color pictures and left-to-right pages (usually right-to-left for Japan). Though, the original aesthetics and paper quality slowly deteriorated the later the issue.

The reason why the magazine read from left-to-right was stated to be because Shintaro Tsuji found it natural this way.[3] It is considered this may have been a reason for its lack of popularity in Japan.

Lyrica continued until March 1979 (No. 29) until it was discontinued.