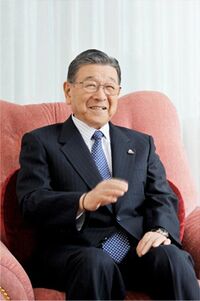 Shintaro Tsuji (Japanese: 辻信太郎), born on December 7, 1927 is the former founder of Sanrio, a producer of Sanrio films from 1977 to 1985 and storywriter. In 2020, he stepped down from the role of CEO of the company. His grandson Tomokuni Tsuji is now the president.

He worked on the establishment of the theme parks Sanrio Puroland on November 12, 1987 and Harmonyland on October 22, 1988.[citation needed].

His nickname is "the king of strawberries" (Japanese: いちごの王様); similar to Strawberry King.[1]

Shintaro Tsuji was raised by a single mother, a business woman, whose family owned a chain of inns in the Yamanashi Prefecture near Tokyo, Japan. Tsuji went to a Christian kindergarten, but felt alienated by the religion. However, the tradition of birthday parties (relatively foreign to Japan, in a time when parents often did not know their children's birthdays) was loved by him.[2]

Unfortunately, his mother died to leukemia in 1940, so Tsuji went to stay with his uncle and aunt. Due to the World War II, food was in short supply; this and stricter upbringing/verbal scolding, and no more birthday parties made it difficult for Tsuji.[3]

Tsuji was a romantic type with a keen interest in Greek mythology. He was known for his poetry (once expelled from school for writing a love story; less tolerated at that era especially for males). In April 1945, he studied organic chemistry at the local technical college; a subject considered as useful for medical science during the war.

Tsuji was also a one-time bootlegger, selling unauthorized products like soap, saccharine (sweetener) and hard liquor to the black market/yakuza; at this time these products (in addition to the previously mentioned food) were in demand, and had influenced official suppliers not producing as much.[4]