Hello Kitty is a Sanrio character created in 1974, designed by artists such as Yuko Yamaguchi. She is a cheerful character who is an anthropomorphism of a Japanese bobtail cat, meaning that she has traits of both a human and a cat.

She is arguably the most successful Sanrio character who is known across the world and can be found in countless Sanrio merchandise of many kinds for both children and adults.

Hello Kitty usually has no visible mouth. According to Yuko Yamaguchi, this is so that people can "project their own feelings onto her face", which may suggest that people can emphasize with Hello Kitty regardless of whether they are happy or sad.[1] Another reason given by Sanrio why Hello Kitty has no mouth is that Hello Kitty "speaks from the heart" and that as an ambassador to the world she "isn't bound to any particular language".[2]

The first Hello Kitty merchandise is believed to be a coin pouch with Hello Kitty, some milk, and Hello Kitty's fish that simply says "Hello!"; a product under Sanrio's Petit Purse branding.[3] She also had a counterpart known as Baby Kitty, not to be confused with later designs.[4] 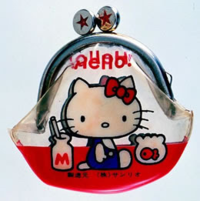 Hello Kitty originally wasn't the most popular Sanrio character, as early in her history the Little Twin Stars were once more popular. In fact there was a point where she was losing popularity after her first artist retired, until the introduction of Tinychum as Hello Kitty's friend, and smart marketing strategies (such as Hello Kitty Print Clubs), as well as celebrity recognition made her popular again. This made her so popular that even overseas countries would recognize her more, such as United States (a phenomenon known as the Kitty Boom).[5]

Hello Kitty's real name is Kitty White. She was born on November 1st. She is blood type "A" and lives in Suburban London. She is good at making cookies, and her favourite word is "friendship". Her favourite subjects are English, music and art.

She is "five apples" high and weighs "three apples".