Sanrio Timenet (Japanese: サンリオタイムネット) is a monster-battling game developed by Imagineer for the Game Boy Color, which is also compatible with the Game Boy. It was released only in Japan on November 27, 1998.

There are small differences between the versions, including different available monsters and each version being originally set in its respective time periods (past for Kako-Hen or future for Mirai-Hen).

Players build up a team of creatures ("monsters"), often by catching them using items known as Get Cards (or later in the story, a Digital Camera) and use them to battle against other creatures.

The games support the Game Boy Game Link Cable; which can be used to battle with other players and exchange information. Pictures of monsters and Sanrio characters met in the game can be printed using the Game Boy Printer.

According to an insert with Pocket Hello Kitty, a Nintendo 64 entry in the series called Sanrio Timenet World was planned but never released.[1]

The protagonist receives an email from the Old Man of Time, who explains the situation and requests that he or she helps save the world of Timenet by collecting the Time Fragments, before the flow of time is permanently lost.

This game features a hero and rival and at the beginning of the game the player can either choose a male or female hero as the protagonist. The other character will act as the rival.

The rival will race the player to change the world of Timenet back to its original state, and will act as the player's rival at various points in the game. Soon after, the Old Man of Time takes the player to the world of the past (Kako Hen) or future (Mirai Hen). For some reason, the protagonist can hear a girl exclaim "help me" while travelling... 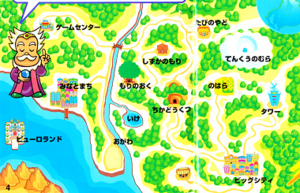 The world of Sanrio Timenet in the past, as seen from above (source: manual).

The following locations are areas that can be accessed both with by foot/bicycle and by the Earth Watch — a late game item that allows warping.

In their quest, the player must travel to the future (Kako Hen) or the past (Mirai Hen) but after beating the game, they can no longer time travel. Depending on whether the player is in the past or the future, the names of places are different as well as monsters and which characters appear.

Near the end of the game, the player finds out the identity of the villain who destroyed the Pillar of Time and confronts her on Mars.

At the beginning of the games, the player has a choice of one of three starting monsters ("bodyguards") at level 1. The available bodyguards differ between Kako-Hen and Mirai-Hen.

Illusory monsters are monsters in Sanrio Timenet: Kako Hen and Mirai Hen that cannot be obtained normally in game without an official distribution or a cheating device.

Sanrio Timenet: Kako Hen and Mirai Hen have a "character data" menu which documents the roles of Sanrio characters as they appear in the games. The list is as follows.

Hangyodon notably does not appear, but he was included as a rare monster in Mars Tower, and he has two evolutions; Great Hangyo and Hangyodon Robo. He is one of the only first-party Sanrio characters to appear as a monster and not a regular character, another is Gerara.

Sanrio Timenet: Kako Hen and Mirai Hen feature 161 collectible monsters, as well as event monsters known as Monster Zakki and White Zakkī who may be unobtainable.

Yuuko Mori, Yasushi Kamegai, "Everyone who gave us Hello Kitty"

A Japanese manga series based on Sanrio Timenet without first-party Sanrio characters known as Bouken Jikuu Timenet (literally "Adventure Space-Time Timenet") was produced by Sakuramaru Yamada with illustrations by Hiroshi Soya. It was serialized in Shogakukan's "Elementary School Fifth Grade" and "Elementary School Sixth Grade" magazines starting from 1999. The manga was collected in two booklets (tankōbon).

Bouken Jikuu Timenet is notable for its 'off-color humour' that many may find offensive, abusing themes including blood, nudity (censored) and near-death experience.

The manga is copyrighted to Timenet, a subsidiary of Imagineer.